A Behanding in… more places than just Spokane!

By littlemoJuly 23, 2013September 1st, 2014A Behanding in Spokane
No Comments

A Behanding in Spokane has one week of shows left at Little Mountain Gallery, and we think it’s worthwhile to have a quick look at how handlessness is expressed in the art of ancient civilizations as well as in modern pop-culture. Egyptian Statue, ca. 2000 BC – BEHANDING truly reaches back into antiquity. Hieroglyphs indicate that this young Pharaoh had his hand eaten by a Nile crocodile while happily playing catch outside his mummy’s house. 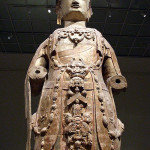 Jesus Christ, Mexico City, 2011 – Not just for Buddhists, BEHANDING caught on eventually with Christians too. The Christian doctrines of charity and forgiveness centre around the words from the Gospel of Matthew: “But whosoever shall taketh from thee thy right hand, turn to him the other also.” Matt 5:39

Star Wars, ca. long time ago – Like father like son: a patrilineal BEHANDING. Luke Skywalker’s behanding at the hands of his father (above) who was behanded himself by the saber of Count Dooku (below). For some, this behanding bleeds from the pop-culture category into the religious. Captain Hook, played by Dustin Hoffman in “Hook,” 1991 – J.M. Barrie conceived the Captain as a nightmarish bedtime-story character intended to keep the upper-class British children he baby-sat from playing with their genitals during storytime. Originally, Hook was BEHANDED by his own appendage, which turned against him after constant abuse. The story was later Disneyfied, and the crocodile-behanding, with historical roots in Ancient Egypt, was preferred. Jaime Lannister, from Game of Thrones, ca. Season 3 – Loses hand, gains humility. BEHANDING brings out the best in everyone. Merle, from The Walking Dead, 2013 – This hillbilly detritus finished a close 2nd to Mr. Carmichael in the Goddam One-Handed Bastard Of The Year competition. Don’t tell me what happens to him, I haven’t finished season 3 yet!

It should now be plain to see the long legacy of BEHANDING that our production has found its place among. Come see – Tuesday until Sunday at Little Mountain Gallery, doors at 7:30. Did we miss anyone??
Next Post

We’ve got one final week of Behanding! Get your hands on some tickets before they’re gone!